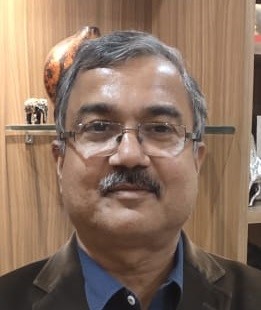 Prof. Kandarpa Das joined Krishna Kanta Handiqui State Open University, Guwahati as Vice Chancellor with effect from 11.03.2020. Before assuming office, he was serving the Department of Foreign Languages of Gauhati University as a Professor in Russian Language and Literature. An eminent scholar, a Fulbright Fellow and an exponent of Open and Distance Learning (ODL) in Assam as well as in India, Prof. Das had completed his Post-graduation in Russian Language and Literature from the Jawaharlal Nehru University (JNU), New Delhi and obtained his Doctorate degree from Moscow State University, Russia. He has published extensively in areas like Russian Studies, Comparative Literature, Cultural Studies and Open and Distance Learning. Since 2000, he has been supervising doctoral candidates in Gauhati University and till date he has successfully supervised 19 (nineteen) scholars for the Degree of Doctor of Philosophy. He has edited and published two books in the field of Open and Distance Learning and Cultural studies.

Prof. Das served as the Director of the Institute of Distance and Open Learning, Gauhati University for two terms i.e. 2006–2011 & 2011- 2016. As the Director, he was responsible for transforming it into a pioneer Institution of Distance and Open Learning in the country. Under his stewardship, the Institute grew into a viable, self-sustained and important centre of the University and subsequently, it was recognized as a premier ODL institution in the Country and abroad. With much experience and exposure at the grass root level on the University system and educational administration at the highest levels, Prof. Das earned recognition from the academic fraternity as a successful educational administrator and institution builder. He played an important role in Gauhati University in various capacities. He actively participated in policy making as members of the Court, Academic Council and various statutory bodies of Gauhati University. Other than the Directorship of IDOL, GU, he successfully performed important administrative responsibilities like—the Director, Internal Quality Assurance Cell (IQAC), Secretary, University Classes, Head of the Department and Chairman, Press Advisory Committee and Town Advisory Committee of Gauhati University. He has been a regular resource person for different Orientation and Refresher courses in the UGC Human Resource Development Centre, Gauhati University.

Prof. Das has completed two major research projects funded by the UGC and the Department of Science and Technology, GOI. He also acted as the co-investigator and local coordinator for India in the International Project on “OER Differentiation in Global South” jointly conducted by Brazil, South Africa, Indonesia, Malaysia, India and sponsored by IDRC, Canada. He has participated in various seminars and conferences in India and abroad, delivered key note addresses, acted as panelist/resource persons besides chairing various sessions and presenting papers in a number of national and international forums. Prof. Das was invited by various foreign universities to deliver lectures which include the prestigious Russian State University for Humanities, Moscow; Moscow State Regional University, Moscow; Universitas Terbuka, Jakarta, Indonesia; Open University, Hongkong; Hanoi Open University, Vietnam and Open University, Japan. In 2015, Prof. Das was awarded the prestigious Fulbright Fellowship to attend the Fulbright-Nehru International Education Administrators’ Seminar and visit several higher education institutions in Boston, New York city and Poughkipsie, USA. In 2018, Prof. Das was invited by the Federation Council of the Russian Federation (Upper House of the Russian Parliament) to act as an International Observer for the elections of the Russian President held on 18th March, 2018.

Prof. Das was also associated with the establishment and expansion of the Community Radio services in India and served as the Founder Station Director of the Radio Luit 90.8 FM, the Community Radio Service of Gauhati University from 2011-2016. He was instrumental in forming the Community Radio Association of India, a platform of the community radio broadcasters of the Country and served as its founder national President. He also acted as a Jury member for the prestigious National Community Radio Award, 2014. Recently, he completed a major Project “Science for Women’s Health & Nutrition through Community Radio” sponsored by the Department of Science and Technology, Government of India as its Principal Investigator.

Prof. Das was honoured with important positions at different national and state level bodies including Member, State Audit Advisory Board (SAAB), Assam; Member and Neutral observer, State level Empowered Committee (TET for primary and secondary schools, Government of Assam); Vice President of the Indian Distance Education Association; National Vice President, Indian Association of Teachers of Russian language and Literature and several other academic and professional bodies. He also participated in the Policy making and consultations of various national and international bodies including National Council for Teacher Education, India; Distance Education Council, University Grants Commission, Asian Association of Open Universities (AAOU), OER Asia and so on. In 2016, he was nominated as the member of the Steering Committee of the “Asian MOOCs”, an initiative of the AAOU.

Prof. Das played a pivotal role in the establishment and development of the Krishna Kanta Handiqui State Open University, Assam and also served as the founder member of the Board of Management, Finance Committee, Academic Council and the Selection Committee. He was instrumental in leading the group of experts for preparation of the very first phase of Self-Learning Materials (SLMs) of the University and training of the academic staff who had initially joined this University.