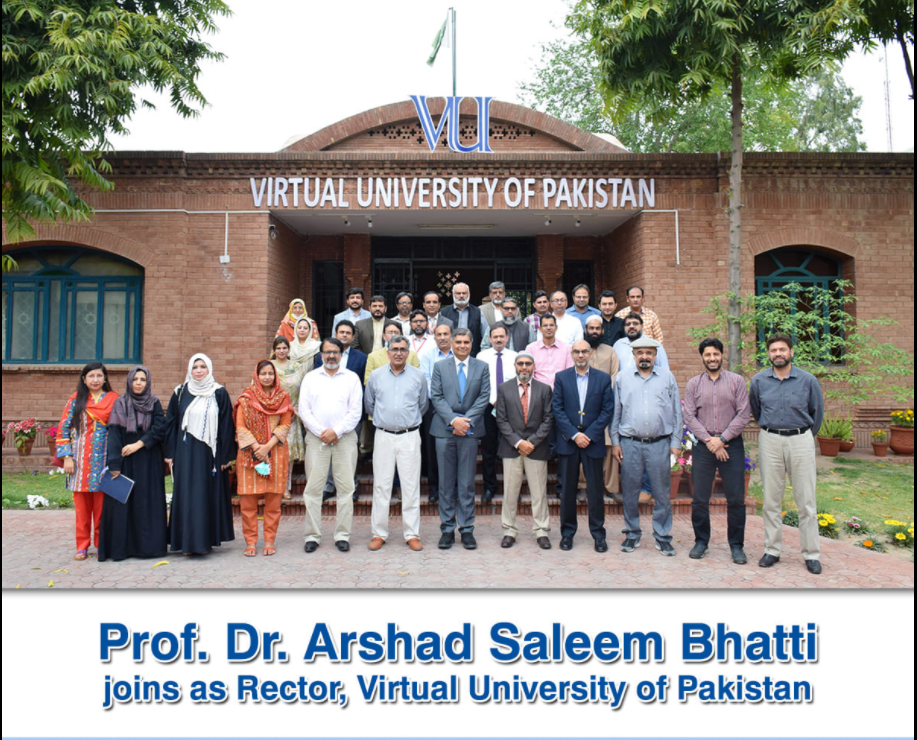 While Introducing the new Rector, Mr. Naeem Tariq said that Prof. Dr. Arshad Saleem Bhatti obtained his first degree in Physics from the University of the Punjab, Lahore. He then completed one year training in Computer Hardware and Software from the Computer Training Center, University Grants Commission by winning President Scholarship. He joined University of the Punjab as Lecturer in 1989 and proceeded to United Kingdom for higher education. He obtained his M.Phil. and Ph.D. degrees from the University of Cambridge, UK in Microelectronics and Optoelectronics. He did Post-Doctoral work at the University of Roma in Italy, University of Nottingham, UK and University of Illinois at Urbana Champaign, USA. He has supervised 14 PhD students, more than 50 MS students. He has published more than 130 research articles in ISI indexed journals and International Conferences. His cumulative impact factor is more than 275 and has more than 1200 citations. His research achievements include four US Patents granted. He has delivered many lectures in local and International conferences and at several institutions.

Furthermore, he said that new Rector also has e-Education experience and has developed online Video Lectures and web based courses for MIT BLOSSOMS project, ISESCO, and virtual laboratory. He has been Regular Associate and Senior Associate of International Center for Theoretical Physics (ICTP), Triestbe Italy from 1997 to 2015. His last assignment was as the Dean of Faculty of Science in COMSATS University, Islamabad, where he developed a laboratory for Micro and Nano Devices. His research interests encompass materials science, nanostructures, optoelectronics, and low temperature physics. On his continuous efforts for education, Prof. Dr. Arshad Saleem Bhatti was awarded with Tamgha-i-Imtiaz in 2012 and Sitara-i-Imtaz in 2020.

Speaking on the occasion the new Rector, Prof. Dr. Arshad Saleem Bhatti said that his mission is to take the Virtual University at next highest level in international corridors of education. He said after COVID-19 world has realized that virtual education is the need of hour and VU is already working on this motto by spreading the education through its digital platform across Pakistan. We will follow the footstep of great founding Rector, VU Dr. Naveed. A. Malik, he added.

At the end, he thanked the former Rector Mr. Naeem Tariq for his efforts as head of the intuition.